A quarantine station, a dumping ground for plague victims, more recently a mental hospital — the tiny island of Poveglia in the Venice Lagoon has served many unpleasant purposes over the years, but today it stands empty, a crumbling collection of abandoned buildings and weeds run riot just two miles from the glittering palaces of the Grand Canal.

Legends and rumors about Poveglia are nearly as pervasive as the weeds, and they read like a horror story: that so many people were burned and buried there during the black plague that the soil is 50% human ash; that local fishermen give the island a wide berth for fear of netting the wave-polished bones of ancestors; that the psychiatrist who ran the mental hospital was a butcher and torturer who went mad from guilt and threw himself from the island’s belltower, only to survive the fall and be strangled by a “ghostly mist” that emerged from the ground. 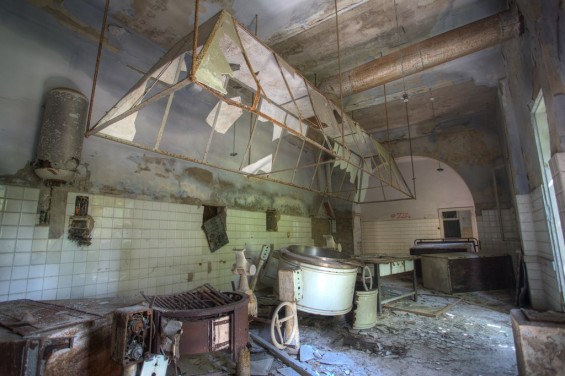 Weary of an island in their beloved lagoon being characterized as a “festering blemish … the waves reluctantly lapping its darkened shores” (from a book called TRUE Hauntings from Around the World, emphasis not mine) or “nothing more than a cesspool of pure dread” (according to the hyperbolic host of a show called Ghost Adventures), Venetians have done what they can to tamp down overheated rumors about Poveglia.

They deny being frightened of the place and tend not to mention the plague pits or mental hospital when discussing the island’s history; a recent article in Venice magazine claimed that the institutional ruins which dominate Poveglia were nothing more than a rest home for the elderly.

But as long as the island remains tantalizingly off-limits to tourists and crammed with rotting buildings that are just a gondola ride from some of Europe’s priciest real estate, rumors will keep flying and people will keep telling scary stories about it.

READ ON via Strange Geographies: The Happy, Haunted Island of Poveglia — mentalfloss.com.