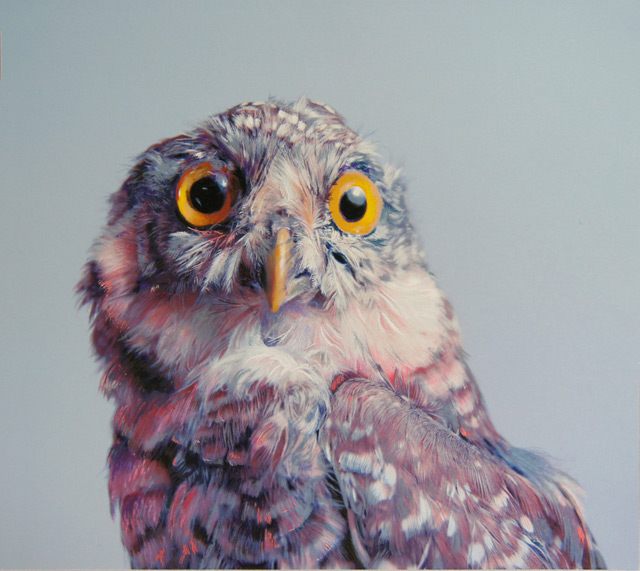 Pusateri currently teaches in the Department of Architecture at Unitec, New Zealand and  has a number of works available through Seed Gall.

See more from this owl series in his portfolio. (via devid sketchbook, thnx jessica) 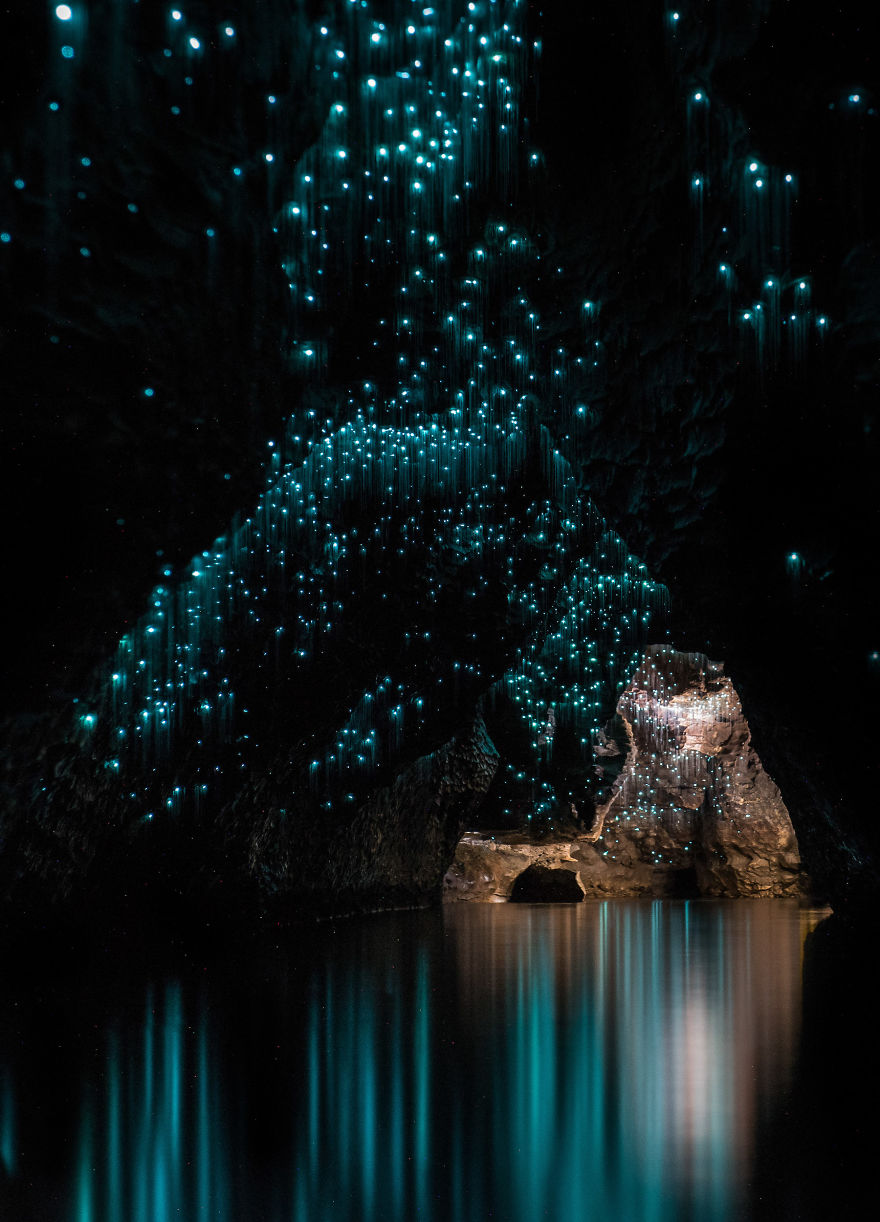 Something quite special dwells beneath the surface of New Zealand and these images prove that the country is just as beautiful below ground as it is above!

The Waitomo area is famous for it’s limestone caves and within these caves are one of the most magical insects in the world, the glowworm.

Glow worms emit a phosphorescent glow that light up the cave and create a surreal environment.

Over the past year I have been back and forth to Waitomo’s Ruakuri Cave to master the art of photographing these magnificent little creatures – it’s been quite the experience!

When the headlamps are out and all you can see are the glowworms, you can’t help but feel like you’ve stepped into James Cameron’s Avatar Pandora, it’s just unreal!

Photographing glow worms is very similar to shooting the night sky, however the exposure time can be much longer.

These images in particular range between 30 seconds and 6 minutes exposures.

To achieve the shots, it required me to submerge myself and my tripod in cold water for up to 6-8 hours a day – it was totally worth it!

The natural tunnel is part of the Te Whanganui-a-Hei Marine Reserve on the Coromandel Peninsula.

It also served as a portal to Narnia in The Chronicles of Narnia: Prince Caspian.

This photo and caption were submitted to the 2014 National Geographic Traveler Photo Contest.

By venturing into the 30-million-year-old limestone caves on New Zealand’s North Island, photographer Joseph Michael was able to capture magical images of the glowworms that call this place home.

Against the natural backdrop that the cave provides, it looks as though there are hundreds of miniature, blue-tinted stars, but this is actually the work of glowworms known as Arachnocampa luminosa.

Using a long-exposure method, the photographer was able to capture the glowworm larvae and their enchanting light in a way that makes the limestone formation look as though it’s an indoor, starry sky.

In the close-up photos, you may notice that something is hanging from the bioluminescent gnat larva.

These are the twinkling larvae’s nests, which are composed of up to 70 silk threads that contain droplets of mucus.

In order to attract prey into these threads, the larvae glow bright, but not all continue to do so once they become adults. Male glowworms will stop glowing a few days after emerging from the nest, while the females’ glow will increase in order to attract a mate.

With this in mind, it seems that the photographer caught the glowworms at the perfect time for his Luminosity series. 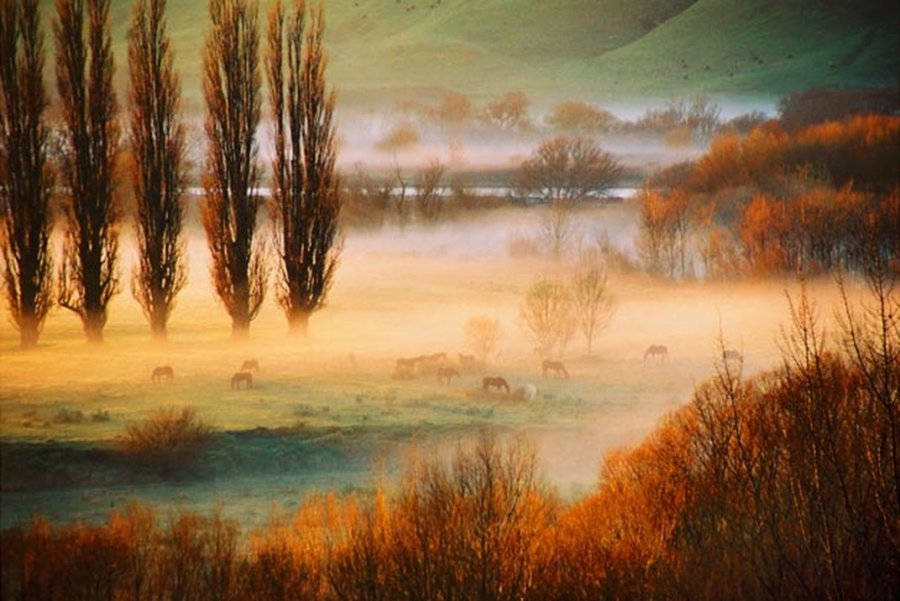 Joelle Linhoff has been a Member since 2015 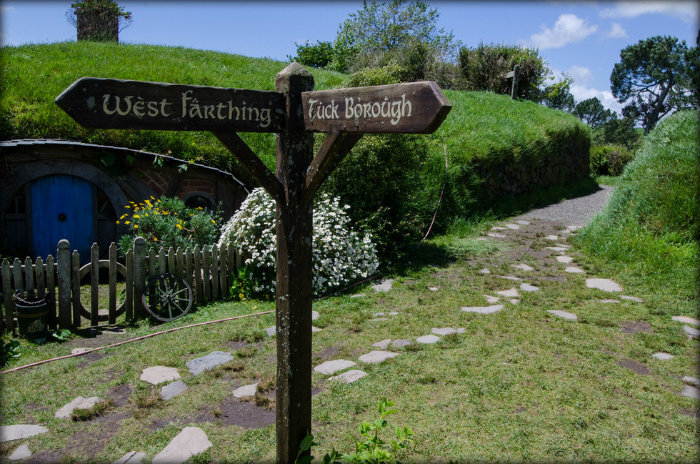 Even before it was retrofitted with several Hobbit Holes to play the part of Hobbiton in Peter Jackson’s adaptations of the classic Tolkien book series, this sheep farm seemed like a perfect stand-in for the famous fictional “Shire,” home of hobbits everywhere.

Indeed, its natural likeness is undoubtedly the reason Jackson and his producers chose the location – with the only other qualification being that it’s located in New Zealand, unofficial real-life location of Tolkien’s Middle Earth.

The farm is still an active sheep farm, but visitors can tour the area used for the set.

Most of the Hobbit Holes are fenced off and you can’t enter them, but one is specifically designed for visitors to enter and explore. Tour guides are employed to explain where in the movies each area appears – Bag End is a highlight, along with The Green Dragon, a whimsical old-world pub.

In fact, The Green Dragon is now open for business and at the end of the tour you can have a drink there.

The set is very detailed and the hobbit holes are purposely made to look as though they have been there for years, complete with details like fake moss and many other small touches.

The tree at Bag End is a fake tree intended to preserve the area’s appearance as it was in the film, even though the one featured in The Lord of the Rings was real.

The film version was actually cut down and placed there for the movie.

It died by the time they decided to film The Hobbit, so a fake tree with hand-painted leaves sits in its place, an exact replica of the original.

The gorgeous location makes it easy to see why this was chosen for The Shire.

The farm is in the middle of the countryside, still seemingly hidden from the modern world.

A GPS is helpful in locating it, since there aren’t really any signs directing you where to go.

The remains of a giant penguin the size of a human have been discovered in New Zealand.

It lived in the Paleocene Epoch, between 66 and 56 million years ago.

Why was the penguin gigantic? “This is one of the largest penguin species ever found,” Paul Scofield, the museum’s senior curator, told the BBC.

It was specific to the waters of the Southern Hemisphere, he added. Penguins are thought to have become this big because large marine reptiles disappeared from the oceans, around the same time that dinosaurs disappeared.

“Then, for 30 million years, it was the time of the giant penguins,” Mr Scofield said. 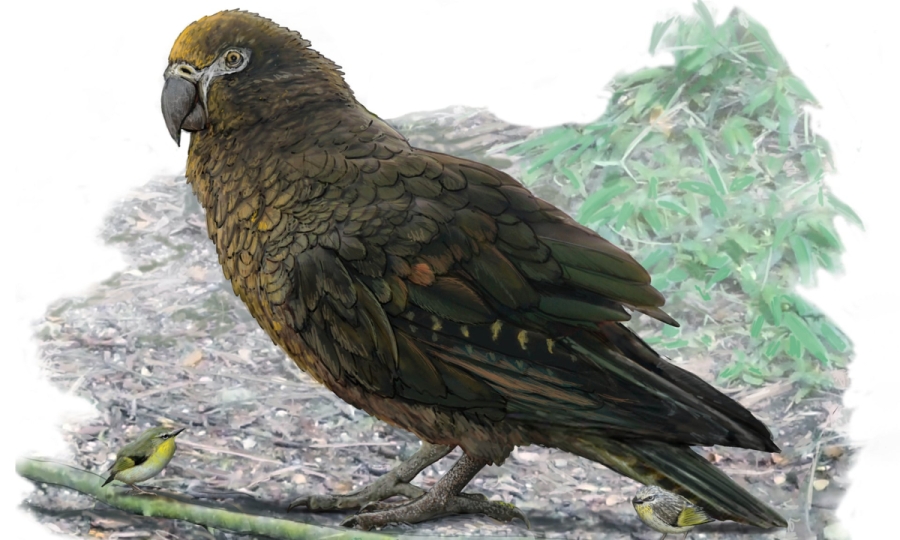 A reconstruction of the parrot.

Fossils of the largest parrot ever recorded have been found in New Zealand.

Estimated to have weighed about 7kg (1.1st), it would have been more than twice as heavy as the kākāpo, previously the largest known parrot.

Palaeontologists have named the new species Heracles inexpectatus to reflect its unusual size and strength and the unexpected nature of the discovery.

Prof Trevor Worthy of Flinders University in Australia, the lead author of the research published in the journal Biology Letters, said: “Once we decided it was something new and interesting, the challenge was to figure out what family it was from.“Because no giant parrots have been found previously, parrots were not on our radar – thus it took some time to differentiate all other birds essentially from parrots to conclude that the unique suite of characters was definitive of a parrot.” 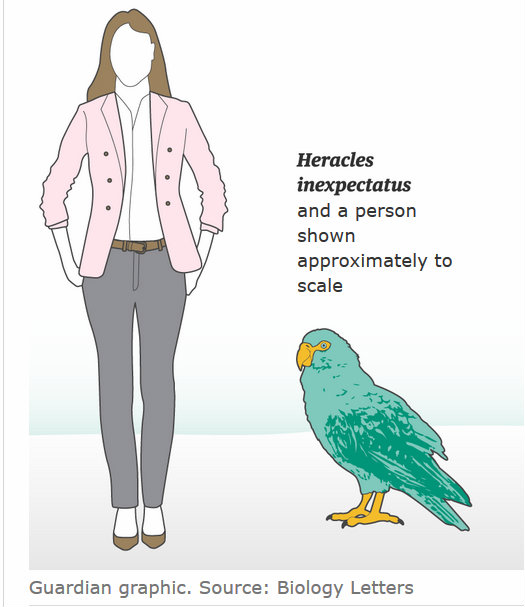 Paul Scofield, a senior curator of natural history at Canterbury Museum, said the fossil had been excavated in 2008, and initially the team had thought the bones were part of a giant eagle.

The bones, which will go on display at an exhibition in November, were found in a fossil deposit from the early Miocene epoch, about 19m years ago, near Saint Bathans in Central Otago, New Zealand.

Although the area is now very cold and known for its skiing, Scofield said the climate at the time meant the parrot would have lived near a giant lake in a diverse subtropical forest.

“Back then, it was a subtropical environment quite similar to northern New South Wales, and even had similar vegetation,” Scofield said.

He said the parrot’s weight meant there was a possibility it was flightless. Although the bird’s diet is unknown, Scofield noted most parrots today are vegetarian.

Announcements of the Lumiére brothers’ autochrome process were reported widely in New Zealand newspapers during late 1907 and early 1908. The process was described as a dream come true for photographers longing to discover a way of making photographs in a process that was able to represent natural colours.

However, while the process was eagerly anticipated and widely discussed it has remained a minor footnote in histories of photography related to New Zealand.

Like the earlier daguerreotype and ambrotype, autochromes are unique, one off photographs which produce an image directly onto a glass plate rather than a negative, an aspect which no doubt appealed to amateur photographers with artistic aspirations.

In early 1908, Wellington photographer Elizabeth Greenwood gave a reporter from the Dominion newspaper a first-hand demonstration of the process.

Greenwood exposed two plates – one a portrait of a group of girls and the other a still life – giving the reporter the chance to compare the resulting plates with the real subjects in the studio.

The portrait plate was exposed for 30 seconds with the only favourable result being the brilliant reproduction of a blue dress worn by one of the subjects.

Meanwhile Greenwood exposed the second plate of a still life scene for three and half minutes resulting in a plate the reporter described as more brilliant than the actual scene – rich in colour and detail including in the shadows.

However, it wasn’t long before the inadequacies of the autochrome process for widespread commercial use was raised. In May 1908, in response to rumours in Auckland, the city’s Star newspaper printed an advertisement in which a monetary reward was offered to the person able to produce a colour print on paper using a process that could be of commercial value.

According to the advertiser someone in the city was claiming to have done ‘what the cleverest scientific men in Europe have so far failed to do, that is, to produce Photographic Prints in Natural Colours.’

The advertiser, G. F. Jenkinson, stressed he was not interested in ‘an autochrome transparency upon glass, which are now fairly common and of no value except as lantern slides. 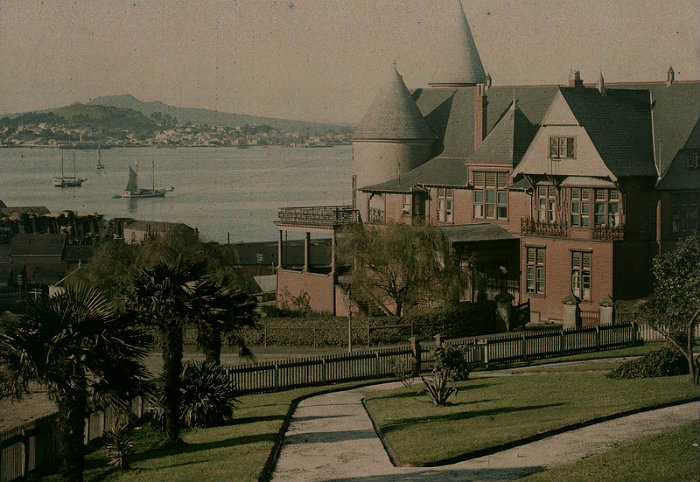 via Autochromes from the Te Papa collection | The Public Domain Review. 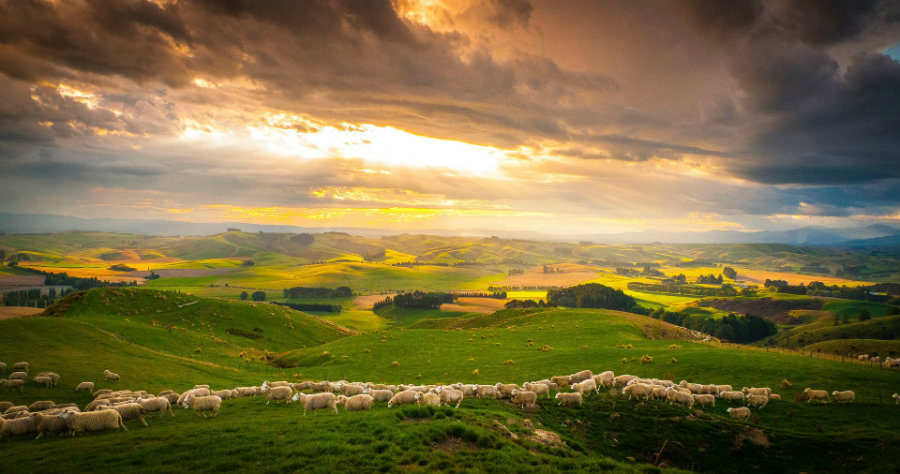 At their peak in 1982, there were twenty-two sheep for every person in New Zealand.

Nowadays, the numbers have fallen by two thirds and are now estimated at just over seven sheep per person. 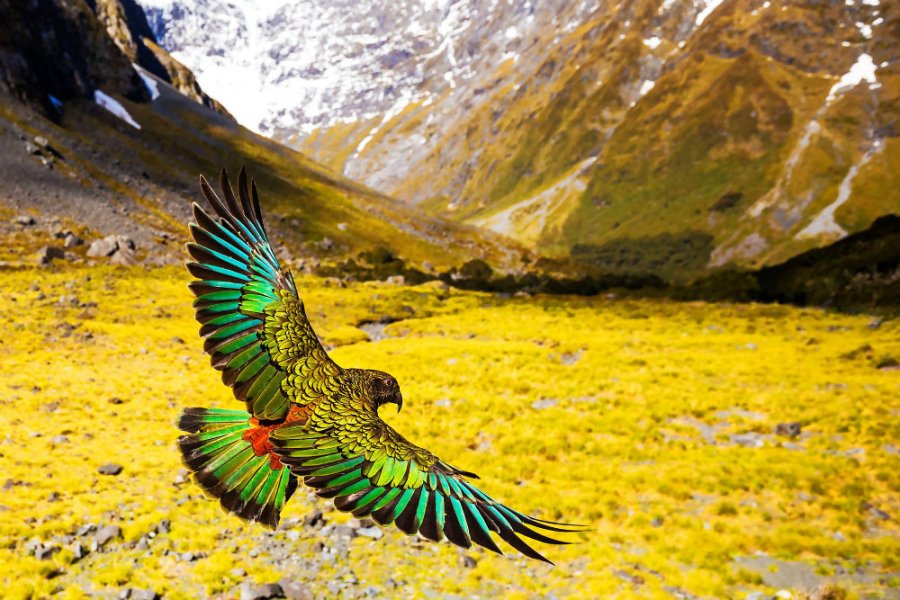 Kea are the only true alpine parrots in the world and thrive as cunning opportunists in the freezing conditions of the Southern Alps.

Kea are thought to have developed their wide array of food-finding strategies during the last great ice age, where they learned to adapt using their unusual powers of curiosity.