It’s hard to believe that anything as jaw-droppingly futuristic could be 57 years old, but the lava lamp (or astro lamp as it was originally known) has been around that long.

Invented by a British accountant named Edward Craven -Walker in 1963, the lava lamp quickly became an icon of 1960s psychedelia, with news of the product spread by worth-of-mouth.

The lamps work by using a light bulb to heat a bottle containing coloured oil and water (and some other minor chemicals – but those are the main two). The oil and water have similar densities but are insoluble to one another, meaning they don’t mix.

When the bottle is heated the oil absorbs the heat first, expanding in size as it does so. The expansion means that it becomes less dense and begins floating upwards.

As it floats up it cools, contracts and falls back to the bottom of the bottle, starting the chain of events all over again.

This continual slow motion process is based around very slight differences in density between the oil and water – the balance between them is like a very sensitive pair of scales, with small amounts of heat tipping the balance back and forth.

Bizarrely, the assembly line robots who help the humans have come from Detroit’s collapsed motor industry.

via Made in England for 50 years: the lava lamp celebrates its birthday – The Independent. 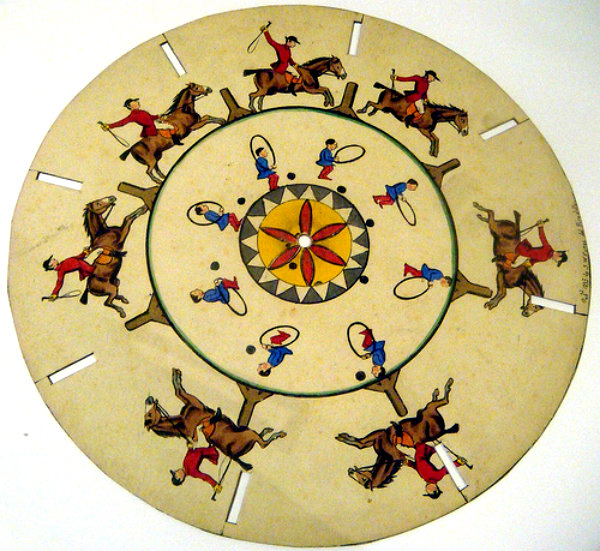 The Phenakistoscope — a popular Victorian parlour toy, generally marketed for children — is widely considered to be among the earliest forms of animation and the precursor to modern cinema.

The device was operated by spinning the cardboard disc, and viewing the reflection of the image in a mirror through a series of moving slits. Through the distortion and flicker, the disc created the illusion that the image was moving.

Many scientists of the era had been experimenting with optical illusions, photography, and image projections, and there was something inevitable about the creation of this device, having been simultaneously invented in 1832, by Joseph Plateau in Brussels and by Simon von Stampfer in Berlin.

Plateau was a physicist, but his father had been a painter and illustrator who had enrolled his son at the Academy of Design in Brussels. Although Plateau eventually ended up pursuing science instead, he retained an interest in art and design that proved useful when creating the prototype Phenakistoscope.

Plateau’s original designs were hand-painted by himself, an example of the frequent intersection of Victorian artistry with experimental scientific media that defined the period.

Only weeks later, unaware of Plateau’s creation, von Stampfer, a mathematician, developed a near-identical device that he named the Stroboscope.

The device proved popular, and was soon mass-produced and marketed under some more easily-pronounceable names, including Phantasmascope, Fantoscope, and even the prosaic “Magic Wheel”. 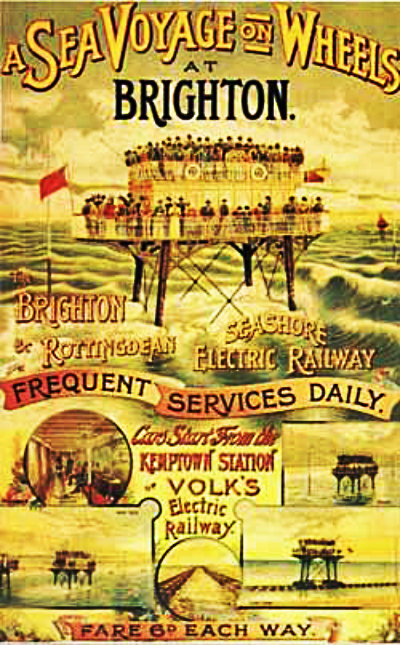 The Brighton and Rottingdean Seashore Electric Railway was a unique coastline railway in Brighton, England that ran through the shallow waters of the English Channel between 1896 and 1901.

Magnus Volk, its owner, designer and engineer, had already been successful with the more conventional Volk’s Electric Railway, which had then not been extended east of Paston Place.

Facing unfavourable geography, Volk decided to construct a line through the surf from a pier at Paston Place to one at Rottingdean. 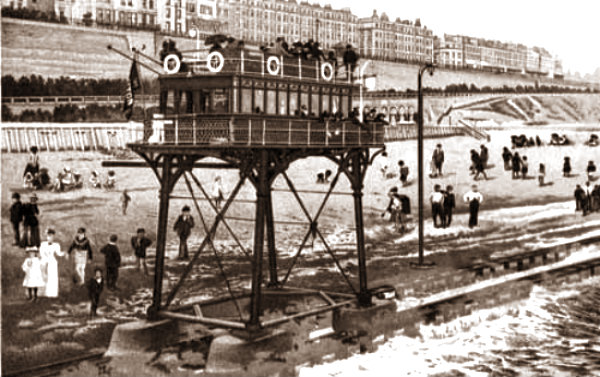 The tracks were laid on concrete sleepers mortised into the bedrock, and the single car used on the railway, a huge pier-like building which stood on four 23 ft (7.0 m)-long legs, was propelled by electric motor.

It was officially named Pioneer, but many called it Daddy Long-Legs.

Construction took two years from 1894 to 1896. The railway officially opened 28 November 1896, but was nearly destroyed by a storm the night of 4 December.

Volk immediately set to rebuilding the railway including the Pioneer, which had been knocked on its side, and it reopened in July 1897.

In 1900 the council decided to build a beach protection barrier, which unfortunately required Volk to divert his line around the barrier.

Without funds to do so, Volk closed the railway. A model of the railway car is on display (along with a poster for the railway) in the foyer of the Brighton Toy and Model Museum. (Text from Wikipedia.)

via The Daddy Long Legs of Brighton | The Public Domain Review.

A stapler is a very satisfying object, securely attaching paper with a pleasing crunch.

Small wonder that it is so often a child’s favourite stationery item. The emergence of the stapler reflects a rise in the use of paper within offices during the 19th century.

Previously, sheets of paper had been held together by pins or string or, in the case of legal documents, red tape. It is often reported that in the 18th century France’s King Louis XVI used the very first, suitably ornate stapler, but there is no evidence to support this.

Not everyone liked the idea of a metal fixing. In the early 1900s, several devices were invented which punched through and then wove the papers together in one action, but the idea never really took off.

The notion of creating a more secure fastening, however, was given a boost when Philadelphian Henry Heyl patented a stapling device in 1877 which could attach and fasten papers in one action.

Heyls’ invention was closely followed in 1879 by fellow American George McGill’s commercially available stapler, which drove a 12 millimetre length of wire through papers and then folded its ends when the top of the machine was thumped down with a single-stroke, rather like a test-your-strength game at a fairground.

This was simplicity itself; the key to any good stapler is the ability for one hand to hold the papers while the other operates the stapler.

It was first displayed in Philadelphia’s Centennial Exhibition of 1876 and is a heavy object that looks a little like a Singer sewing machine.

This eventually led to smaller and lighter staplers, and magazines that held up to 200 staples were commonplace by the 1920s.

Not everyone liked the idea of a metal fixing, however.

In the early 1900s, several devices were invented which punched through and then wove papers together in one action, but the idea never really took off.

READ ON via From offices to hospitals, the history of the stapler ABC Radio National

Article by M. Christian and A. Abrams

Horse and buggies, hoop skirts, steam engines, bustles … oh, yes, life around the turn of the previous century was a delight of simplicity and workmanship. But that doesn’t mean that the artisans and engineers of way-back-when didn’t at least have their hearts and minds in the right place.

One of the earliest of those bright bulbs was William Austin Burt who, in 1829, created what he called a ‘typewritor.’

If Burt’s machine was, in fact, the first is a matter of much debate – as another, similar, machine had also been built by Pellegrino Turri around the same time. Some even say the crown of ‘first’ should go to Henry Mill, who created a writing machine way back in 1714.

All of these devices represented just baby steps: more potential than actual ability to help with clear, concise and fast writing. There were a lot of others after these early pioneers, but none of them were ever a real commercial success.

Looking at them you can see why: in many of these very early models – called ‘index typewriters,’ by the way – the typing was done by selecting the letter to be used on a slider and then pressing it against the paper.

To call these early monsters ‘slow’ is being kind.

Changing the alphabetical slider to a disc version helped a bit but not enough to make any of these machines easy or popular.

Here is a “Linear Typewriter”: one look at this machine and you can see why it was never a big hit. Just think about transcribing anything on this beast: 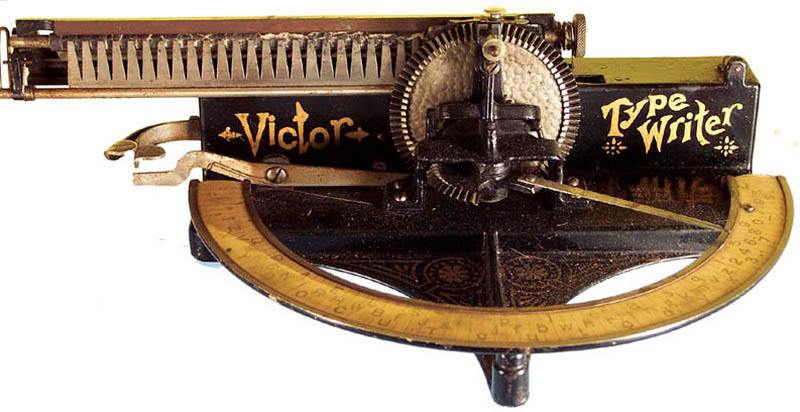 Touted as the “newest contribution to the enjoyment of living”, news of the ingenious “rowing-bath” comes to us from the pages of a 1916 edition of The Popular Science Monthly.

Consisting of what amounts to some sort of a metal dustpan tied by a rubber cord to the taps, the device promises to secure “the zest which accompanies the pleasant pastime of buffeting surf”.

It seems, however, that the general public did not quite share the excitement of the article, or the ecstatic model it depicts, as nothing much more is heard of the invention again (although we did find mention of a similarly named device from 1904). 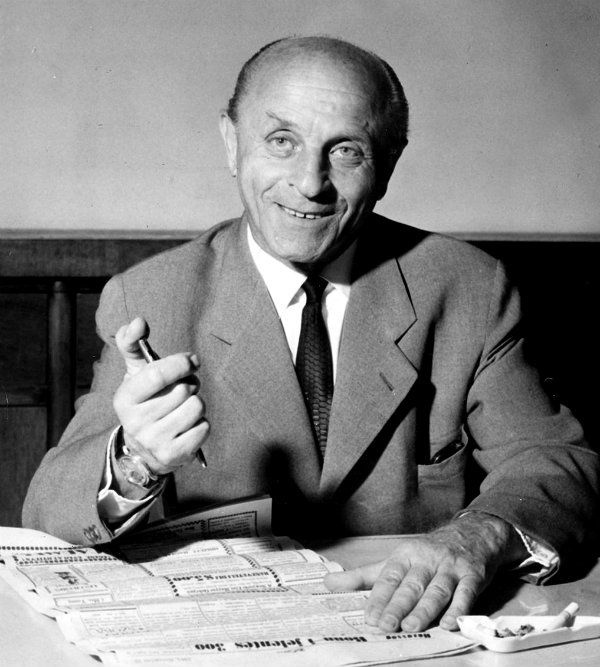 The Hungarian Laszlo Biro (above), a magazine publisher, noticed, during a visit to a printer, how quickly the printer’s ink dried. It occurred to him that this fast-drying ink would work well in a fountain pen. This dense ink, however, would not flow through a pen.

Therefore, Biro decided to replace the metal writing nib of his pen with a slim ball bearing.

As the pen moved across the paper, the ball turned and suctioned ink from the reservoir, which then transferred it to the paper.

This principle of the ballpoint pen was not, however, a new one. It had been patented in the year 1888 by John J. Loud, but had not been used commercially.

Biro first patented his pen in the year 1938. In 1940 he and his brother ran away from Hungary to Argentina.

There, on the 10 June 1943, he patented his pen again. A clerk of the British government, Henry Martin, who was, by chance, at that time in Argentina, was interested in the fact that Biro’s pen wrote at any altitude above sea level, and therefore because it was not affected by air pressure or other atmospheric conditions.

It immediately occurred to him to make it available to navigators in airplanes. The British government bought the patent and in 1944 a pen under the brand name Biro was produced for the Royal Air Force.

In 1950 Marcel Bich  who had acquired the rights to the pen began to sell his French pen and in 1953 he founded the BiC company (using an abbreviation of his name).

By the end of the 1950s it controlled 70% of the European market and in 1960 it became the owner of the Waterman Pen Company in New York and it sold its pens on the North American markets for 29 to 69 cents per unit.

BiC completely controlled the market. Parker and other companies had to rest satisfied with a small market for fountain pens and more expensive models of ballpoints.

Today the modern version of Biro’s pen, under the brand name BiC Cristal, sells 20 million pens throughout the world every day.

via The Ballpoint Pen.. 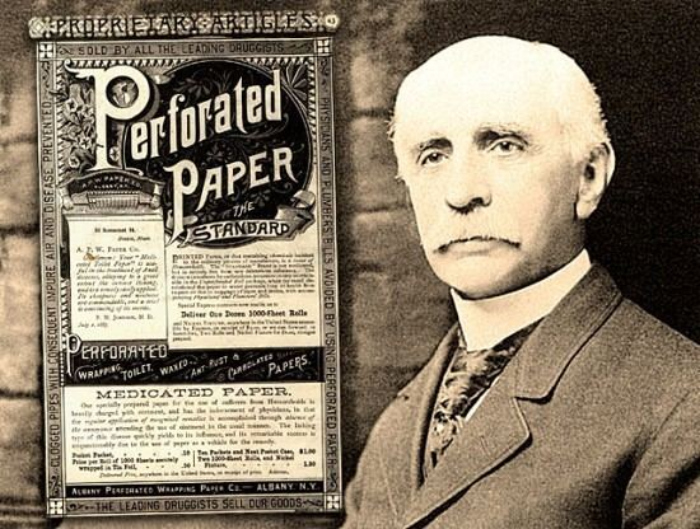 The first mentions of toilet paper were found in the Chinese 5th century writings and during the 14th century.

They even started regular mass production of such paper in the amounts of over 10 million sheets in only one province.

Wealthy citizens and the royal family in Beijing even had access to the several types of soft, stylized and perfumed toilet paper.

In the others parts of the world, use of paper as a cleansing accessory was almost unheard of.

There are several reasons for that – inability to produce massive and affordable quantities, inefficient or nonexistent toilet plumbing network, and more.

Gayetty was born in Massachusetts USA, and worked in New York where he came to the idea of toilet paper in 1857.

His product was marketed and intended to be used as a medical accessory, but it was later remembered as a commercial disaster (although this product remained in licensed use until the late 1920s).

It was sold in a package of 500 papers (scented and watermarked with the manufacturer’s name) and was advertised as a help for people who had troubles with haemorrhoids.

From that point on, use of toilet papers became widespread in the entire world.

Before the invention of hair dryers, women would often attach hoses to the exhaust ends of vacuum cleaners to blow-dry their hair. 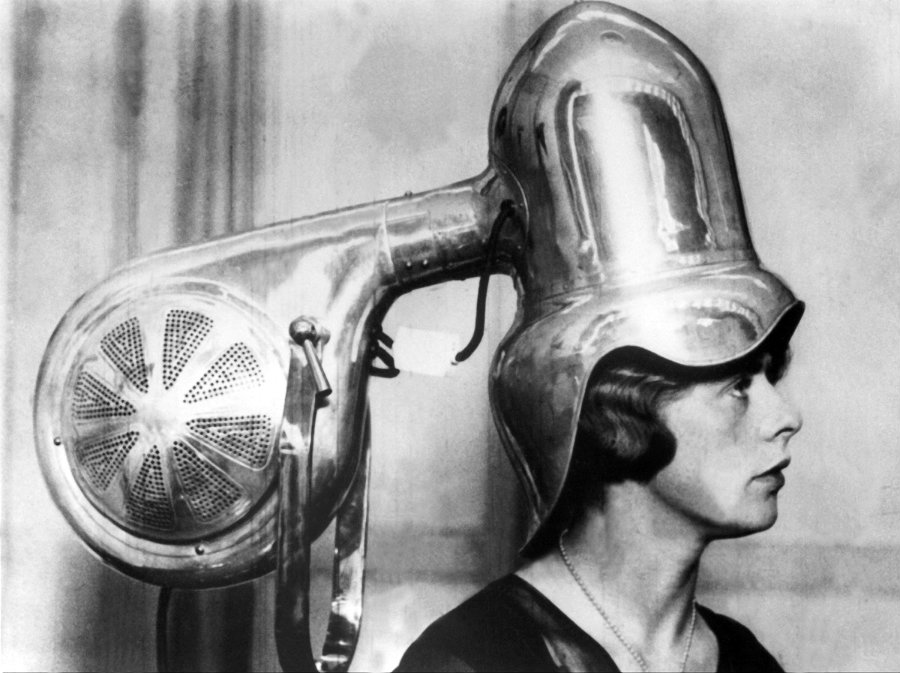 A woman sits under a chrome-plated hair dryer, 1928. (Keystone-France/Getty Images)c.

A stylist uses a freestanding dryer to blow dry a client’s hair with controlled precision at the Hairdressing Fair of Fashion in London, 1929. (Puttnam /Topical Press Agency/Getty Images) 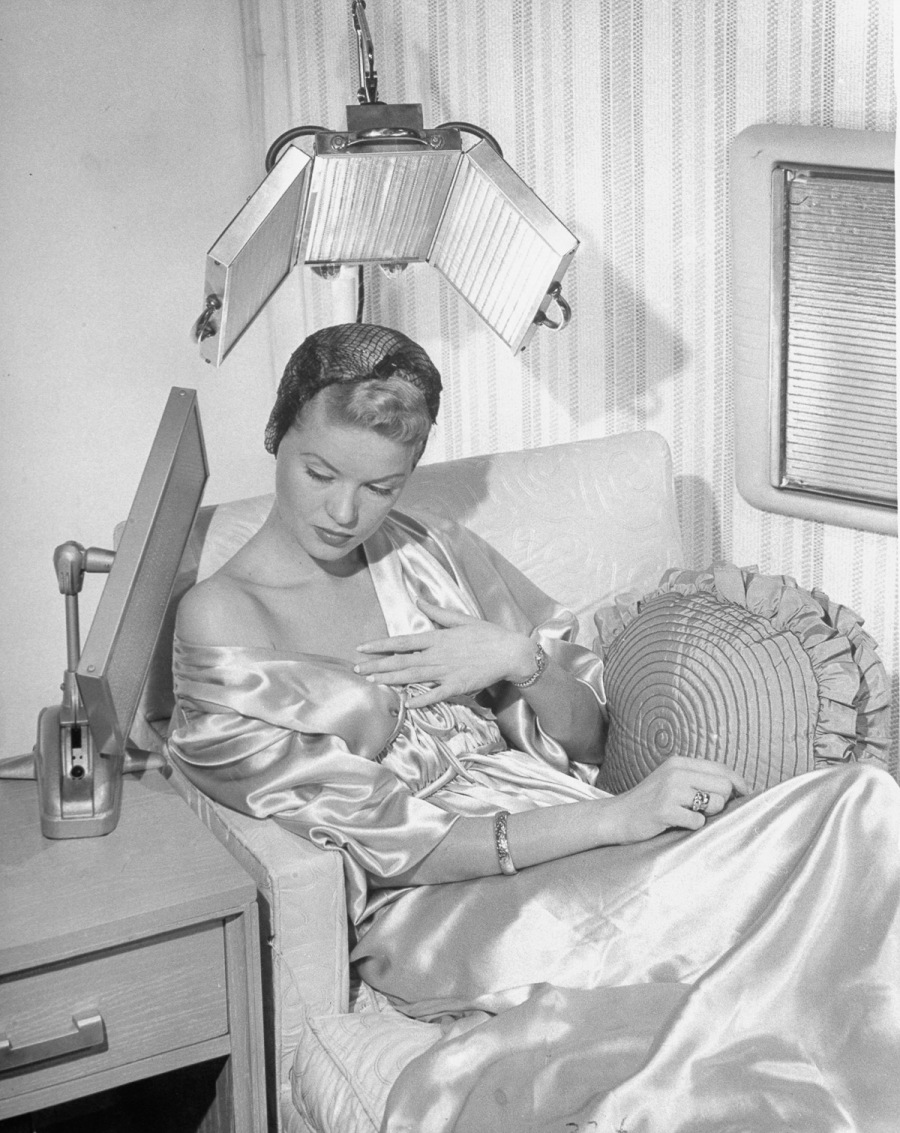