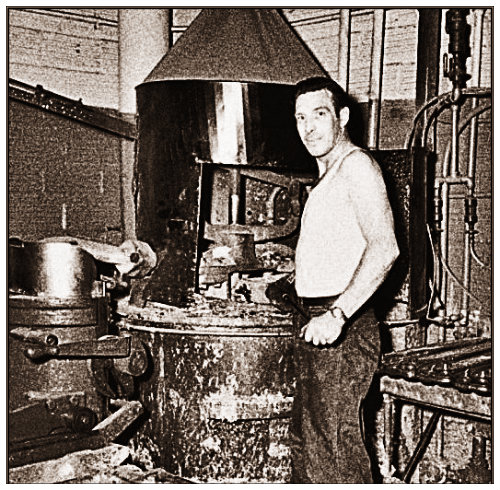 This is not me. The bloke pictured here is about nine inches taller than me, handsome and built like a “brick shithouse”.

One of my first jobs of a morning when I entered the “dog box” which we called the Comp Room at National Paper Industries. Port Road, was to switch on the Lead melting pot.

It was electrically operated and would melt the lead slugs from the Ludlow typesetter which had been dissed from the completed print jobs.

It was a dirty job and of course was left to the “shit boy” to do. That was me…

Depending on what went into the pot the smell could become a bit rank, but generally it was cigarette butts, and the occasional sweepings off the shop floor.

At one point in the process I had to open the lid to whack some flux in, which supposedly would help clean the lead, antimony and tin that made up printer’s lead.

One Monday morning I flicked the switch on and went about my business.

I never knew that on the Friday night before all the bosses, arse crawlers and office staff had organised a huge piss-up after work.

Unfortunately, on their way down to the factory toilets a number of them had spotted the open melting pot (not working) and being lazy bastards had relieved themselves on top of the type metal in the pot.

The smell that came crawling out of the pot as the stale urine turned to steam was unbearable and I vomited into the pot setting up a chain reaction which had vomit tainted lead splatter flying around the comp room.

I survived that horrible day and we got a lock to make sure the lid couldn’t be opened when we weren’t on guard.

I was not happy…

One thought on ““The Smelly Melting Pot.””