Prior to that first ABC broadcast, Australians relied on licensed wireless broadcasting services operated by the Post-Master General’s Department.

The system was run by a conglomerate, formed in 1929-1930 of individually operated radio stations across the country (this conglomerate was also called the Australian Broadcasting Company).

The ABC, however, was formed by the government as a way to regulate broadcast services and to ensure that audiences had reasonable access to a range and high standard of radio services.

The ABC was based on the BBC model and was originally funded by a combination of licence fees and some government funding. The ABC’s early services included twelve radio stations across the country offering live music, sport and information programs for 11 hours a day.

It was quickly embraced by Australian households and became a fixture of daily life for many.

In establishing the ABC, the government appointed a board of directors with five commissioners, including a chairman and vice-chairman. The board met for the first time on 27 May 1932, however, they did not appoint the ABC’s first General Manager, Walter Tasman Conder, until the following year.

In its early years, the ABC worked within the constraints of technological barriers for the times. For example, until a cable upgrade in 1933, the landline between Sydney and Perth could only carry speech and not music. Additionally,

Tasmania was not connected to the mainland for broadcast services until a phone line was constructed across the Bass Strait in 1936.

The ABC’s first journalist, P.C. Murphy, was appointed in 1934. Consistent with the times, news reports were often lifted from newspapers.

The ABC radio schedule in the 1930s included a range of content, including: the Children’s Session with Bobby Bluegum and the first pilot for the Argonauts Club; race calls from Sydney’s Randwick racecourse on Racing Notes; cable news from London including stock exchange reports and shipping news; ABC Women’s Association broadcasts of housekeeping advice; and a schedule of assorted dramas, plays, sketches and lectures.

In 1934, music broadcasts became a mainstay following the appointment of Sir Bernard Heinze as conductor and musical adviser.

The 1930s also saw the beginning of cricket broadcasting on the ABC, with test matches in England relayed, ball-by-ball, via cable to the Sydney studio, where they were read out by ABC commentators – including Charles Moses who went on to become ABC General manager and Mel Morris – who described the match as if they were at the ground, “knocking” a pencil against the desk to imitate the sound of a cricket ball on a bat. 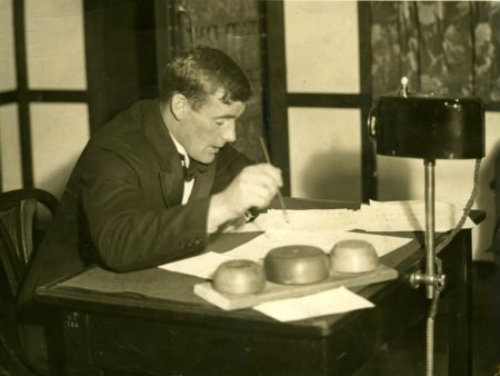 Read on via Source: ABC History | About the ABC