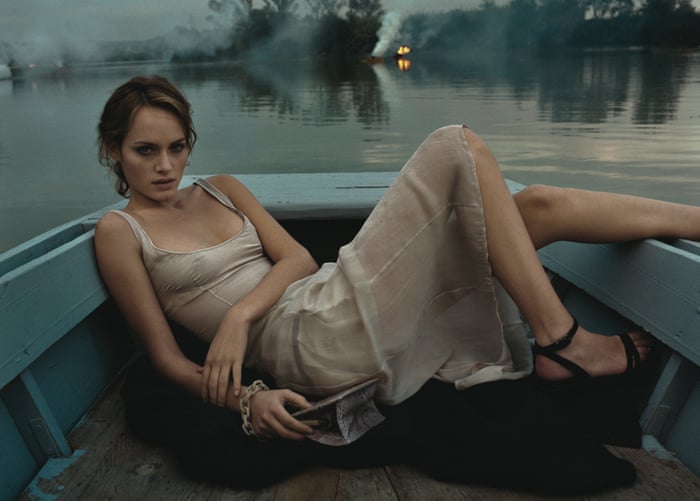 In the gloaming … Amber Valletta on the Tiber. Photograph: Glen Luchford

We had to shut the river Tiber in Rome for this picture. It’s expensive to shut down a whole river, but this was for the Prada 1997 autumn/winter campaign, so we had the budget for it.

You can’t see them, but there are about 10 people in the water, setting fire to bales of hay covered in kerosene to try and make it look misty. We had to shoot it in the last 10 minutes of daylight, so that the colours would be just right.

I wanted it to be more than dusk – you could call it the gloaming.We’d painted the boat the right colour. Everyone was lined up, ready to go, about four hours before we were due to shoot. But right at the last minute, the stylist decided to change the dress to a red one. That proved too vibrant.

Then the boat started to sink and one of the guys throwing the bales of hay in the river forgot to let go and disappeared into the water after it.

I’d been planning it for three months but in the last five minutes of daylight, the entire scene descended into utter chaos.

Mr Bertelli, the boss of Prada, was standing there on the riverbank shouting at everyone. When he asked me if I’d got the shot I said, “No!” and stormed off in a huff.

We went back the next day. We closed the river again and worked on everything we’d done wrong to get it right the second time around. When the film was developed it was exactly what I had wanted to achieve.