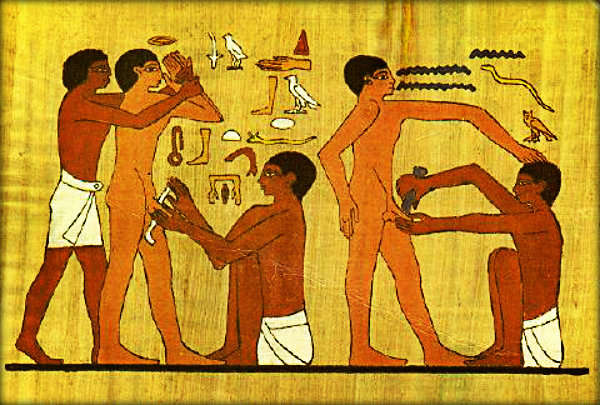 This is one of the oldest known illustrations of circumcision being performed.

Actually, it’s a colorful re-creation of a bas-relief found in an Egyptian tomb built for Ankhmabor in Sakkara, Egypt. It dates back to around 2400 B.C.E.

The origins of circumcision remain unclear. According to this online essay, a stele (carving on stone) from the 23rd century B.C.E. suggests that an author named “Uha” was circumcised in a mass ritual.

By the time you get to 4,000 B.C.E., you start to find exhumed Egyptian bodies that show signs of circumcision.

And then come the artistic depictions.

The Sakkara depiction comes with the perhaps helpful written warning,“Hold him and do not allow him to faint.”

via The Oldest Known Illustration of Circumcision (2400 B.C.E.) – | Open Culture.