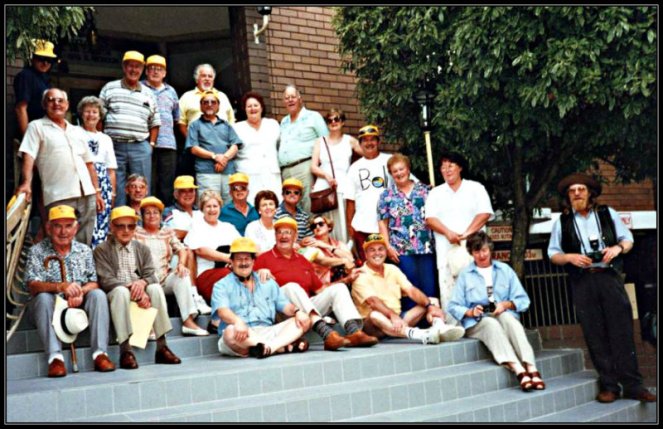 The Cricket Club was a major institution of the Printing Office. It began in 1951 and continued for nearly fifty years before our final visit to Melbourne in 1997.

The Victorian GPO first visited us in January 1951. A picnic was organised at Balhannah which included a tug of war and the first annual cricket match.

The next year South Australia visited Melbourne and this tradition continued with each team travelling to the other State in alternate years.

The home teams won the matches up until 1964 which coincidentally was my very first trip, at age 16. The bus left on Friday with a stop at Tailem Bend and tea break at Bordertown.

Those days there was no booze on the bus. We drove through the night with most people trying to catch some shuteye or singing “Forever and Ever.

We arrived in Melbourne around 6 am and had to stop opposite Flemington race track. We were not able get into our hotel, until 9 or 10 am. So we watched the horses doing their track gallops for several hours. It was freezing!

After checking in a group of us decided we would go to the Young and Jackson Hotel, to see the famous nude painting of Chloe. We got lost!

That evening we had a Cabaret at the Brunswick Hall and the next morning we went to the Kew Mental Institution to play cricket.

We had twelve players including Barry O’Donnell and myself. We were put through our paces by Ron Hamence and Laurie Blackwell to see who would make the final cut.

Victoria batted and we restricted them to 5/125. Laurie Blackwell and John Walker had an opening stand of 84 and our first success in Victoria was a possibility. Several quick wickets fell and with the overs dwinding Malcolm Lind and Dean Groves were promoted up the order. We won by 13 runs.

That night when I returned to the room there was Mort and Grubby drinking in the room. I went off to bed.

Later, I felt this hand coming up from under the bed. I grabbed my beloved cricket bat and whacked this guy with it. I thought I had killed hm. I ran from the room screaming with Mort and Grubby chasing me, saying it was a joke.

The cricket club was much more than just about cricket. Most members joined to experience a unique weekend.

On the Saturday, many members went to the local races and at night entertainment was usually a Cabaret at the Tube Mills, and later the Show Boat on the Port River.

The atmosphere at the cricket was hilarious, who can forget the “Arfa Dunga” show at the Unley Oval put on by Colin Rawlings and David Barber.

The Monday was a men’s only day until the late 1970s when the women became involved. Bus trips were organised to places like Hardy’s winery.

The Les Hawes trophy would be presented along with the handover of the Perpetual Shield.

After a night at North Melbourne Football Club listening to a pissed S.A. captain saying “excuse me” all night, “Chalky” Marks created the “Excuse Me” club.

You were given a leather strip with a number on it. If you did not present it upon request, you were fined 20 cents, The fines were used by Chalky to buy prizes drawn on the Monday.

Bob Allen would arrange with the GP to borrow the delivery van over the weekend. It was used to carry the cricket equipment, “odd” keg of beer and tressles. Ron Garland normally drove.

Once we stopped for a piss break outside of Bordertown. We all got back on the bus and ten minutes up the road, “Nobby” began muttering “Where’s Artie?”

We turned the bus around and went back about 15 kms. There was Artie trying to negotiate the wire fence alongside the highway. (see part 2)