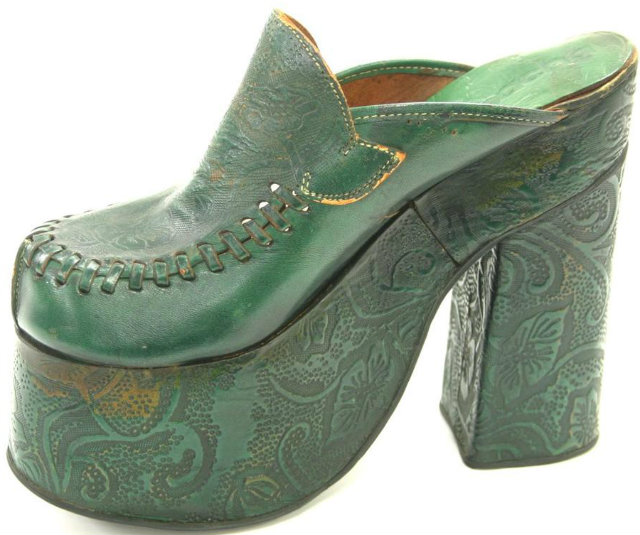 Do you remember the ultra funky platform shoes that were all the rage in the 1970s?

After their use in Ancient Greece for raising the height of important characters in the Greek theatre and their similar use by high-born prostitutes or courtesans in Venice in the 16th Century, platform shoes are thought to have been worn in Europe in the 18th century to avoid the muck of urban streets.

When the biggest, and most prolonged, platform shoe fad in U.S. history began at least as early as 1970 (appearing in both advertisements and articles in 1970 issues of Seventeen magazine), and continued through the late-1980s though not in Europe or the UK where they had all but died out by 1979.

At the beginning of the fad, they were worn primarily by young women in their teens and twenties, and occasionally by younger girls, older women, and (particularly during the disco era) by young men, and although they did provide added height without nearly the discomfort of spike heels, they seem to have been worn primarily for the sake of attracting attention.

Many glam rock musicians wore platform shoes as part of their act.

While a wide variety of styles were popular during this period, including boots, espadrilles, oxfords, sneakers, and both dressy and casual sandals of all description, with soles made of wood, cork, or synthetic materials, the most popular style of the early 1970s was a simple quarter-strap sandal with light tan water buffalo-hide straps (which darkened with age), on a beige suede-wrapped cork wedge-heel platform sole.

These were originally introduced under the brand name, “Kork-Ease.”

2 thoughts on “Funky Platform Shoes – the Past.”