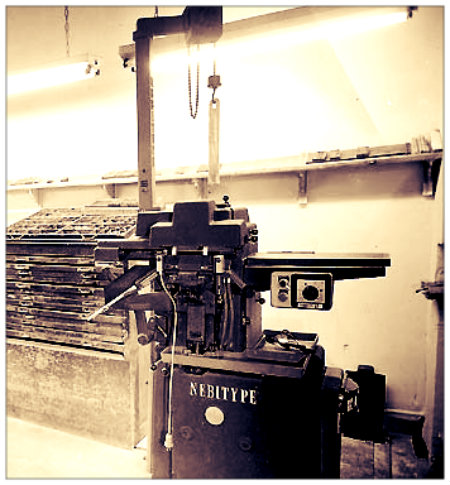 The Year was 1968. I was completing my composing apprenticeship with the Griffin Press, Marion Road, Netley.

My foreman was Alf Freeman, a bald Englishman who had come from England to originally work at the Government Printing Office.

Alf had left after a couple of years for the Griffin.

There I met Nick Penn, Colin Rawlings, Rod Baker, Ted Powell, Ken Simpson, Doug Long and Norm Morcombe all who went on to work at the Old Guv from the 1970s onwards.

However, the point of this tale is to get you to look at the above typecasting machine, the Nebitype.

It was made by the Nebiolo Company of Italy. The Nebitype was a line casting typesetter that spewed a single lead printing slug around 40 picas in length.

It was vaguely similar to the Ludlow Typesetter.

But there the similarity ended, unlike the Nebitype the Ludlow was a very reliable American typesetting machine.

But there was a problem with the Nebitype during its casting cycle and I suspected there was something up when the tradesmen refused to work it.

It was left up to the apprentices, especially the new ones, like me!

The Nebitype had a mind of its own and would often spray molten lead into the air.

Luckily, there was a comp. called Ken Costello (a ballroom dancing champion) who showed me the Nebitype survival plan.

You would place the setting stick in the jaws of the machine and then everyone would scatter.

Ken Costello had a rope tied to the casting handle and the other apprentices would hide behind a typesetting frame for safety.

Meanwhile, Ken would wave a red warning flag to keep people away.

Before hiding you tugged the rope, uttered a short prayer and the machine would shudder into action.

Did it work properly this time? Was the floor covered with molten lead?

It certainly made life interesting in the Griffin Press comp. room.

5 thoughts on “The Nebitype, the Typesetter from Hell.”