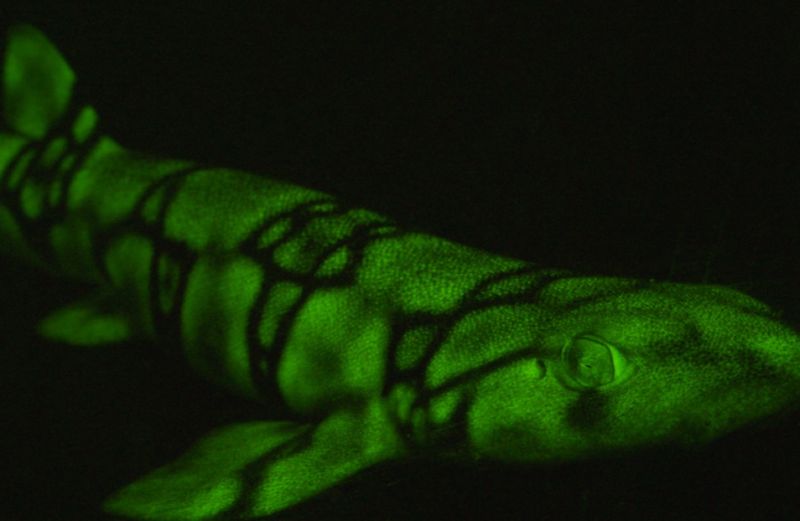 The lighter areas on the skin of this chain cat shark contain a special molecule that absorbs the ocean’s blue light and turns it into green light.

Scientists have figured out why certain species of shark can absorb blue light in the ocean and essentially turn the light green, making them appear to glow. It’s due to a newly discovered family of small-molecule metabolites in the lighter parts of the sharks’ skin, according to a new paper in the journal iScience.

The phenomenon is known as biofluorescence, not to be confused with a related phenomenon, bioluminescence.

These are not “glow in the dark” sharks. Fluorescence is a phenomenon where light is absorbed and emitted at a longer wavelength.

“There are some bioluminescent sharks, and some animals have both properties, making it even more confusing,” said co-author Dave Gruber of the City University of New York.

“Biofluorescence is more of a shallow phenomenon, because that’s where the light is,” said Gruber.

Gruber became interested in studying sharks several years ago, when he discovered that biofluorescence was surprisingly common in more than 180 marine species, some of which were species of sharks and stingrays. Prior to that, most biofluorescence studies had focused on jellyfish and corals.

“There has been a lot of debate about the function of fluorescence in corals, but sharks are animals with very strong visual senses,” said Gruber—something the corals are definitely lacking.

He and Crawford were working on another project when Gruber mentioned the existence of biofluorescent sharks, and it became a joint passion project, even though they didn’t have funding at first.