“A funny thing happened in Australia,” Frank Sinatra told a New York audience. “I made a mistake and got off the plane.”

The plane in question landed in Melbourne on 9 July 1974. Fresh out of self-imposed retirement, the 58-year-old Sinatra was visiting Australia for the first time in 15 years.

His career was back on the upswing after a decade of poor record sales and crappy movies; his five shows, billed as the “Ol’ Blue Eyes Is Back” tour, were eagerly awaited.

Trouble began the moment he set foot on the ground. Nobody was waiting to pick him up. As he headed to his rehearsal in a borrowed car, he was pursued by a journalist, who was disguised as his then wife, the former Mrs Zeppo Marx.

Finally, he sprinted through the rain to the venue with a media posse at his heels, only to find himself locked out. Photos splashed across the afternoon papers showed a very cranky Frankie pounding on the stage door “like a demented fan”.

That night when on stage, the Chairman of the Board let fly. In a prickly monologue, he described journalists as “bums”, and as for “the broads who work for the press”: “hookers” worth “a buck and a half” at best. Shame on you Frank!

The crooner had bitten off more than he could chew.

When the journalists’ union demand for an apology was brushed aside, the Australian Council of Trade Unions slapped a ban on Frank’s  tour. 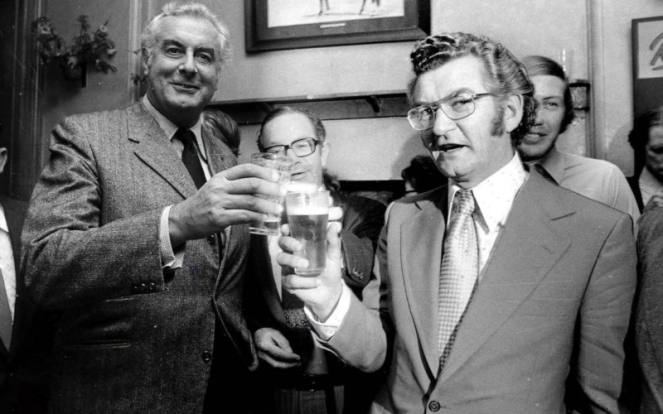 At the suggestion of Gough Whitlam, Prime Minister the president, of the ACTU Bob Hawke, took personal charge of the campaign.

The Silver Bodgie was then 45, a champion pisspot, notorious womaniser and the artful manager of Labor’s industrial wing. He declared that unless Sinatra could walk on water, he would be stuck in Australia until he said sorry.

With transport workers refusing to refuel his jet, Sinatra was forced to sneak onto a commercial flight to Sydney. Holed up in the Boulevard Hotel, he considered calling on the US Navy to rescue him. Eventually, he agreed to negotiate.

On 11 July, the two men met in Sinatra’s suite. Over four hours, an agreement was hammered out.

In return for a statement that Sinatra “did not intend any general reflection upon the moral character of working members of the Australian media”, Hawke was prepared to green-light his remaining concerts.

Bob Hawke went on to become Prime Minister of Oz for some years.