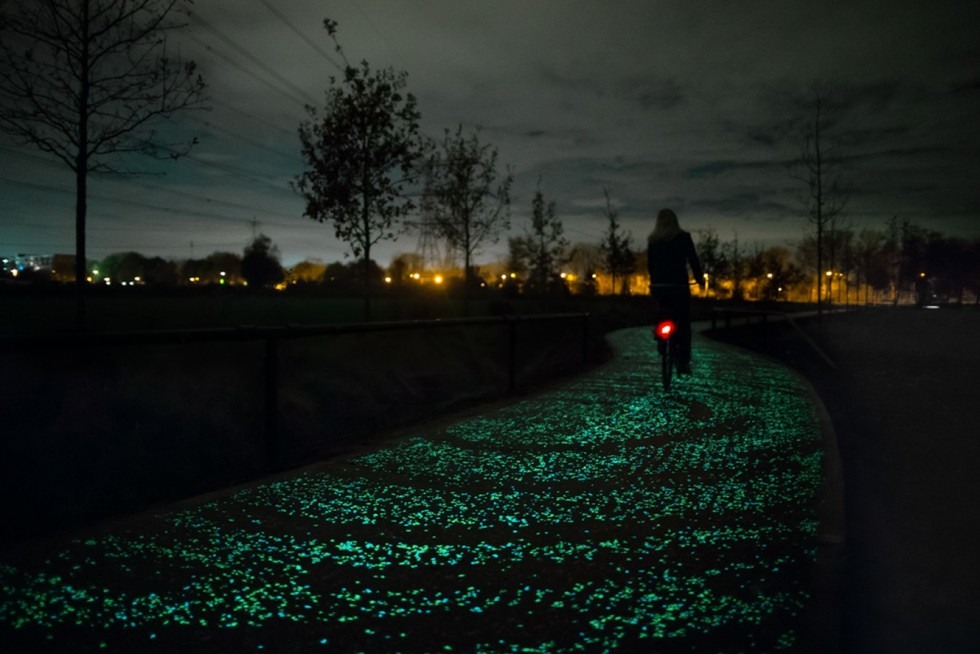 Bringing together sustainable energy concerns, modern art, and an impressionist classic, the Van Gogh Bicycle Path in Eindhoven, Netherlands comes to life each night when the stones in the trail light up in an homage to Van Gogh’s famous work, The Starry Night.

The brainchild of artist and double-letter enthusiast Daan Roosegaarde, the public art project was put in place just in time to celebrate the 125th anniversary of the death of Vincent Van Gogh, who spent a portion of his life in the area.

Roosegaarde installed a number of stones covered in a special smart coating that soaks up solar rays during the day and glow for hours after the sun goes down. The treated stones were cemented into place in swirls and whorls that mirror the celestial whirlpools depicted in Van Gogh’s painting.

At full charge, the glowing path emits a strong blue-green glow, painting bikers and hikers in a soft, but eerie light.

Along with a previously installed highway which glows using similar energy-neutral technology, the Van Gogh Bicycle Path is part of a growing “Smart Highway” that is meant to experiment with and promote, new energy solutions for public works.

Both the highway and the path were created in conjunction with a building firm known as Heijmans, who help with the materials and installation.