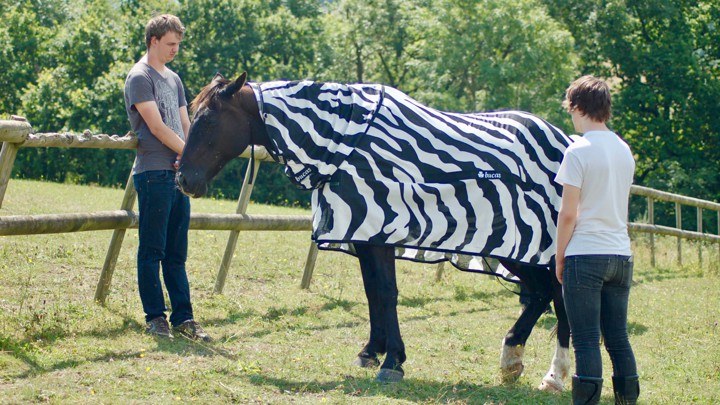 Joren Brugginkof and Jai Lake with a horse that’s pretending to be a zebra.

Are you sure this is a zebra?

it was surprisingly easy to dress horses like zebras.

But, as Tim Caro learned, such coverings have an unexpectedly serious effect. “There are enormous benefits to having a striped coat for a horse,” he told me.

Caro, a biologist at the University of California at Davis, has spent years thinking about why zebras are striped, and has even written a book about this mystery.

In his latest bid to get clear answers, he and his colleagues traveled to Hill Livery, a stable in southwest England that keeps several captive zebras alongside domestic horses.

By comparing these two species, as well as horses that were comically cloaked in zebra-striped coats, the team found fresh evidence for what Caro thinks is the only plausible explanation for the striking stripes:

They evolved to deter bloodsucking flies.

Source: Why Do Zebras Have Stripes? To Shoo Away Flies. – The Atlantic