Stop the Coalition from getting rid of Our ABC

Even more concerning, Pauline Hanson is mounting a hostile parliamentary review of the ABC and SBS, designed to interfere with their charters and editorial content.

It’s a dream come true for Rupert Murdoch and the Conservative think tanks who’ve been fighting for years to cut, gut and destroy our ABC.

We have to fight back.

Fortunately, the ABC is one of the most liked and respected organisations in Australia

Here’s just a small sample of what may never have come to light without our ABC:

If they go through, it could have a chilling effect on ABC reporting on our elected leaders.

It’s not just the fate of our ABC that’s at stake, but also the right of all Australians to hold the government of the day to account.

1791: Australia had its first strike when Sydney convicts demand daily rations instead of weekly rations.

1829: Printing Compositors and Carpenters win the right to be paid with real money, instead of rum.

1854: The Eureka Stockade in Ballarat is stormed by police and troops (30 miners and five troopers are killed). The miners are found not guilty of rebellion.

1856: Australian workers in Australia decide to organise a day of complete stoppage together with meetings and entertainment in support of the Eight Hour Day. The day had such strong support that it is decided to repeat the Celebration every year.

1859: The first Trades Hall is opened in Melbourne.

1882: The Adelaide Typographical Society sets up a workers’ political party with other trade unions.

1886: The Haymarket Massacre in Chicago, USA, is seen as the catalyst for International Workers Day. Outrage as four unionists are executed triggering worldwide action

1891: In Barcaldine, Queensland, shearers go on strike. On 1st May, a parade of over 1300 unionists celebrate May Day. Their strike leads to the formation of the Australian Labor Party.

1891: Adelaide has its first May Day March, after a long period of unrest on the Port Adelaide Docks.

1892: Broken Hill miners strike over wage cuts and use of scab labour.

1907: Justice Higgins hands down the ‘Harvester Judgment’ which establishes the principle of the ‘basic wage’.

1916: The WW1 Conscription Referendum is narrowly defeated after the use of the Unlawful Associations Act fails to stop protests. A Second Referendum in 1917 is soundly defeated.

1928: Savage cuts to the wages and conditions of wharfies, coal miners and timber workers bring on a period of long strikes.

1943: ‘Sheepskins for Russia’ Appeal gets huge support from workers.

1969: Half a million workers strike in support of Tramways Union Secretary Clarrie O’Shea’s release from Gaol.

1998: Patrick Stevedores and the Howard Government use masked scab labor, trained in Dubai, to launch an attack on the wages and conditions of Maritime Union workers.

2007: Australian voters get behind a massive ‘Your Rights at Work’ Campaign, that rejects Howard’s Workchoices legislation and elects a Labor government.

2008: Ark Tribe refuses to attend a conference of the Australian Building and Construction Commission (ABCC) held to determine the legality of CFMEU members attending a safety meeting at the Flinders University Construction site.

2010: Ark Tribe cleared of all charges in November.

2014: Release of the imprisoned Cuban Five after 17 years of struggle paves the way for improved US-Cuba relations.

via History of May Day in Australia: Timeline – May Day SA.

The Australian gold rushes attracted many skilled tradesmen to Australia. Some of them had been active in the chartist movement, and subsequently became prominent in the campaign for better working conditions in the Australian colonies. 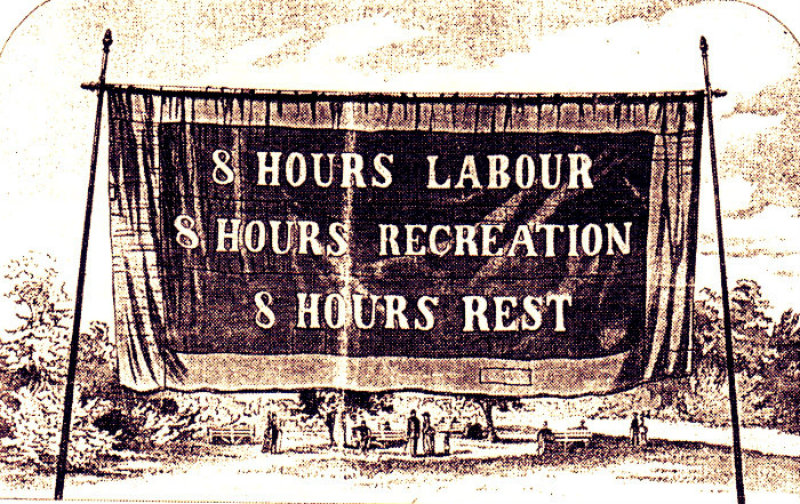 The Stonemasons’ Society in Sydney issued an ultimatum to employers on 18 August 1855 saying that after six months masons would work only an eight-hour day.

Due to the rapid increase in population caused by the gold rushes, many buildings were being constructed, so skilled labour was scarce.

Stonemasons working on the Holy Trinity Church and the Mariners’ Church (an evangelical mission to seafarers), decided not to wait and pre-emptively went on strike, thus winning the eight-hour day.

They celebrated with a victory dinner on 1 October 1855 which to this day is celebrated as a Labour Day holiday in the state of New South Wales. When the six-month ultimatum expired in February 1856, stonemasons generally agitated for a reduction of hours.

Although opposed by employers, a two-week strike on the construction of Tooth’s Brewery on Parramatta Road proved effective, and stonemasons won an eight-hour day by early March 1856, but with a reduction in wages to match.

Agitation was also occurring in Melbourne where the craft unions were more militant. Stonemasons working on Melbourne University organized to down tools on 21 April 1856 and march to Parliament House with other members of the building trade.

The movement in Melbourne was led by veteran chartists and mason James Stephens, T.W. Vine and James Galloway. The government agreed that workers employed on public works should enjoy an eight-hour day with no loss of pay and Stonemasons celebrated with a holiday and procession on Monday 12 May 1856, when about 700 people marched with 19 trades involved.

By 1858 the eight-hour day was firmly established in the building industry.

From 1879 the eight-hour day was a public holiday in Victoria. The initial success in Melbourne led to the decision to organize a movement, to actively spread the eight-hour idea, and secure the condition generally.

In 1903 veteran socialist Tom Mann spoke to a crowd of a thousand people at the unveiling of the Eight Hour Day monument, funded by public subscription, on the south side of Parliament House.

It took further campaigning and struggles by trade unions to extend the reduction in hours to all workers in Australia.

The achievement of the eight-hour day has been described by historian Rowan Cahill as “one of the great successes of the Australian working class during the nineteenth century, demonstrating to Australian workers that it was possible to successfully organize, mobilize, agitate, and exercise significant control over working conditions and quality of life.

The Australian trade union movement grew out of eight-hour campaigning and the movement that developed to promote the principle.”

The intertwined numbers 888 soon adorned the fronts of many union buildings around Australia.

The Eight Hour March, which began on April 21, 1856, continued each year until 1951 in Melbourne, when the conservative Victorian Trades Hall Council decided to forgo the tradition for the Moomba festival on the Labour Day weekend.

In capital cities and towns across Australia, Eight Hour day marches became a regular social event each year, with early marches often restricted to those workers who had won an eight-hour day.

Black and white image of women carrying a banner which reads ‘Union of Australian Women’ in the 1963 May Day March in Melbourne.

This photograph was taken by G.W. Bell of Melbourne.

Women Marching in May Day March carrying a banner, there are church spires in the background behind them.

It should always be the aim of woman to rise from the degrading position assigned her in the age of bestial ignorance and brute power.

Henrietta Dugdale (1827–1918) was a passionate, confident, and assertive feminist who was one of the pioneers of Victoria, Australia’s feminist movement.

She founded the Victorian Women’s Suffrage Society, the first of its kind in Australasia, and lived to see Australian women attain the vote in 1902, due in part to her relentless campaigning.

Henrietta was born Henrietta Augusta Worrell on May 14, 1827 in London, and named after her mother, Henrietta Ann.

She sewed her own clothes and was a skilled chess player, and early on became interested in public affairs. In 1852, she moved to Australia with her husband, a merchant navy officer named J. A. Davies. He died soon after, and she remarried the ship’s captain William Dugdale in 1853.

After over 15 years of marriage, Henrietta separated from William Dugdale and moved to Camberwell (a suburb of Melbourne), where she was to live for the rest of her long life.

Henrietta’s involvement in campaigning for women’s rights began in earnest when she wrote a letter to Melbourne’s Argus Newspaper that was published in April 1869. Using the psuedonym of Ada, she wrote about the Married Women’s Property Bill and spoke out in favor of equal justice for all women:

Along with suffrage for women, she campaigned for women’s dress reform, admission of women to the universities, education of the working class and more equal wealth distribution, and an eight-hour work day.

Along with Annie Lowe, Henrietta founded the Victorian Women’s Suffrage Society in 1884 with the goal of obtaining “the same political privileges for women as now possessed my male voters”.

Jayaben Desai, one of the mostly British-Asian women out on strike at the Grunwick factory in 1977, pictured on the picket line.

It was in 1857, that on 8 March in New York City, garments workers went on strike. Suffering horrific conditions, endless hours and low pay, they took to the streets demanding better money and working conditions.

Dispersed after being attacked by police, the women continued to fight and from their movement the first women’s labour unions were established.

At the Conference of Working Women held in Copenhagen in 1910, Clara Zetkin asked over 100 women from 17 countries – representing unions, socialist parties and women’s working clubs – to pass a motion for an International Working Women’s Day.

They did so, unanimously, and the so International Women’s Day was born.

Zetkin, in conjunction with other well-known women from the movement including Rosa Luxembourg and Theresa Malkiel focussed on the conditions that dictated women’s lives.

They organised with women working in inhumane conditions for long hours and no pay.

Women who also went home to complete their “second shift” – cleaning, cooking, childrearing and household managing; women who were the engine keeping families, communities, companies and countries running, but whose work received little pay and even less recognition.