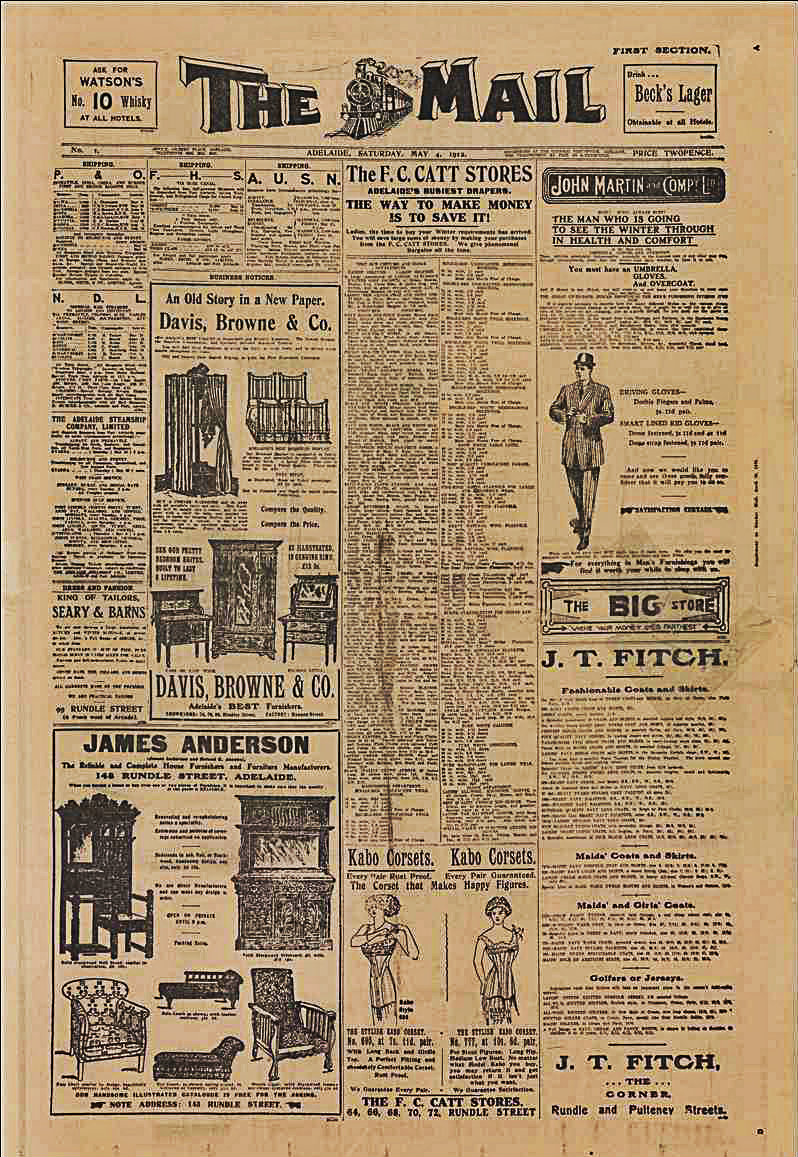 The Mail was founded in 1912 by Clarence Moody. Moody initially set up three newspapers – the Sporting Mail, Saturday Mail and the Mail. The first two titles lasted only two years and five years respectively.

The Mail went into liquidation in late 1914. Ownership passed briefly to George Annells and Frank Stone, and then to Herbert Syme.

In May 1923, News Limited purchased the Mail and moved the newspaper to North Terrace.

By this time the newspaper had developed a strong sporting focus. Results of weekend sporting matches of all types and grades were reported in the Mail.

A particular focus was given to football and horse racing, with many fine sporting photographs and articles being printed. West Torrens footballer and yachtsman Ossie O’Grady became sports writer in 1926 and wrote sometimes controversial sporting feature articles.

In the 1930s Ron Boland began his newspaper career as the horse racing writer, ‘Trafalgar’.

He was later to become editor of the News. Early motoring was another important feature of the newspaper from the 1920s, as was the advent of commercial radio and aviation.

From 1922 under the editorship of George Brickhill, the Mail was a well-presented newspaper with quality reading on a range of topics. No doubt the professionally presented real-estate pages helped fund the improvements.

The much-loved ‘Possum’s pages’ were born in 1921 as ‘the Mail Club’ with letters to ‘Clubmates’ written by ‘Possum’. The page was called ‘Mates own corner’. In 1924 May Gibbs’s gumnut babies, ‘Bib and Bub,’ were the first full-scale comic page in the Mail. They were joined in 1932 by Bancks’s Ginger Meggs.

During the Second World War Lionel Coventry’s ‘Alec the Airman’ joined the pages of the paper. Colour was introduced to the comics at the end of the war. Oswald Pryor was cartoonist for the Mail in 1922-1923, followed by Hal Gye and, in the late 1920s, R. W. Blundell. Harry Longson was cartoonist during the war years.

The Second World War had a major impact on many things, not least on newspaper reporting and production. Although horse racing and other sports were still covered in the pages of the Mail, space was also given to war news and the activities of the armed forces.

During the war the ‘Gossip by Deidre’ page gave way to the less frivolous ‘Diana’s notebook’ with photographs such as ‘Miss Patricia Hubbard at work in her father’s factory’ and other reflections of women’s war effort activities. Even the ‘Suburban acre’ gardening page took on a more serious tone as ‘Weeders digest’.

For its first 60 years the Mail was printed on Saturday nights. Initially two editions were published, with a ‘street’ edition coming out at about 7 pm, followed by a midnight edition which was sold to theatre crowds later in the evening, and distributed throughout the state on Sunday mornings.

The Sunday Mail was first published on a Sunday on 5th November 1972.

Inspired by Rob and Wendy Powell.