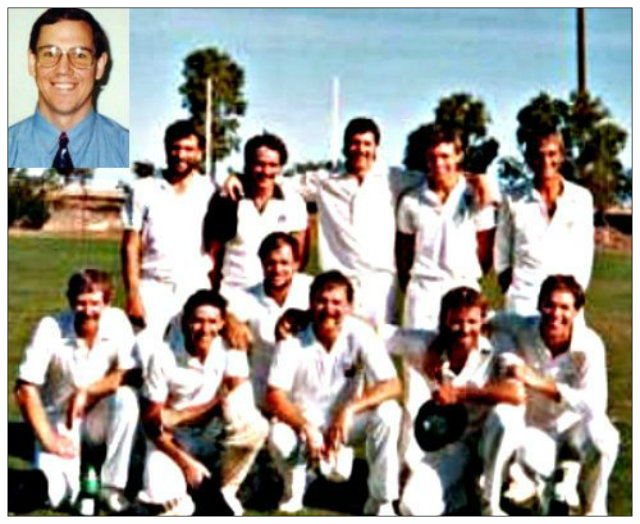 Richard Hood (formerly Comp Room and Riverside) is a quiet achiever but “Hoody” nearly missed out on having a great cricketing career!

Richard first started with the UnHappy Valley Cricket Club, which wasn’t a great move. It seemed that he and Best Mate, Chris “The Crow” Smith were not happy there.

Then Richard almost got sucked into playing with Hallett Cove Cricket Club until he found out from the late Warren Pietsch that Hallett Cove were “a mob of argumentative cheats”.

Then Warren took him gently by the hand and led him down to the Reynella Cricket Club where he served with great distinction over a number of years.

Richard is the player on the extreme right kneeling down. 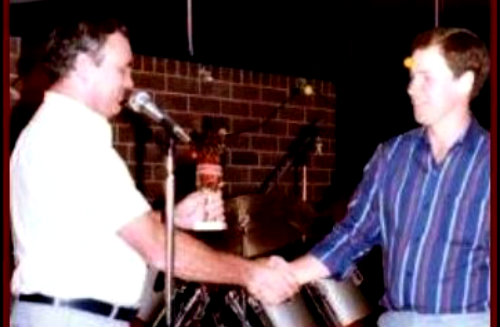 His career with the Government Printing Office Cricket Club was passable but nothing spectacular!

Always languishing in the shadow of that cricketing giant Russell (Rusty) Wight, he became a little frustrated. But he remained loyal to the side.

But Richard could be a little mean once when given a set of beautiful woollen car seat covers by his adoring mates for his birthday he was heard to say under his breath,

“I would’ve preferred a slab of Beer!”

Then on his next trip to Melbourne with The Old Guv Cricket Club the young man went “feral”.

Hoody got pissed and then in his drunken stupor lost both his wallet and all his money at the “Daily Planet” Disco.

The good natured blokes in the GPO Cricket Club had a whip around for the weepy young penniless batsman.

Soon Richard had more dough in his pocket than when he had left Adelaide with.

With his wallet full of cash he played an absolute “blinder” for the Old Guv cricket side that day!