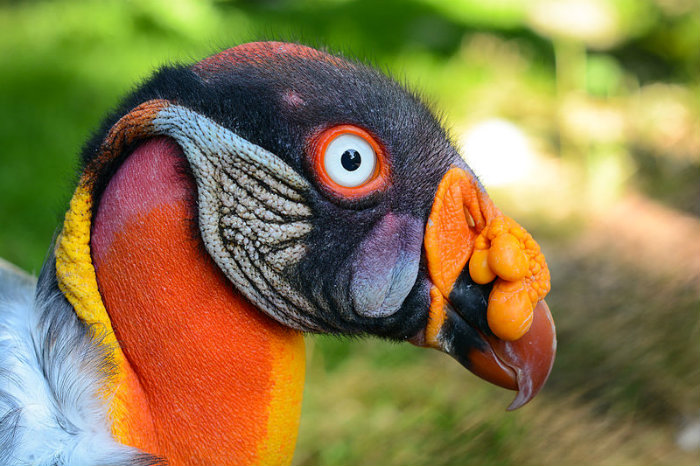 Like other vultures, the king vulture is a scavenger. These large birds glide on air currents, conserving energy while searching the forests or savanna below for the corpses of dead animals.

Because of their unappetizing eating habits, they fill an ecological niche, and may help to prevent the spread of disease by disposing of rotting remains.

King vultures have a very colorful look that distinguishes them from their vulture relatives.

They are predominately white, with black tails and wing tips. They have piercing, often straw-colored eyes and multicolored (yellow, orange, and red) heads and necks.

Though brightly colored, the vulture’s head and neck are bald.

This may help the fastidious birds to stay clean, and ensure that bacteria-laden animal remains don’t fester in the bird’s plumage where they could spread disease.

Sarcoramphus papa are among the bird world’s largest scavengers and have powerful, hooked beaks that are excellently adapted for tearing open tough carcasses.

They can often access meals that other vultures cannot, and smaller birds usually give way when they arrive to feed. 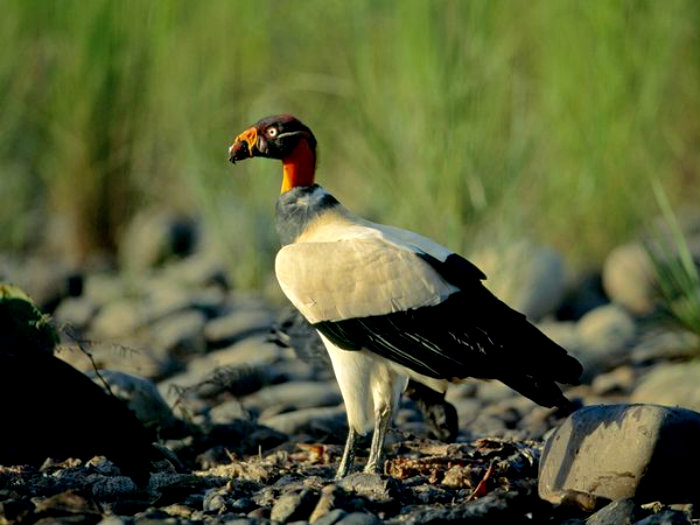 These birds nest on the ground, and females lay a single egg—which both parents incubate. Both parents may also care for infants, bringing back dinner in their stomachs and regurgitating it for their young to enjoy.

King vultures are found from Mexico south to Argentina.

Some suggest that the bird’s name stems from an old Mayan legend in which this vulture was a “king” or “lord” that carried messages between humans and the Gods.