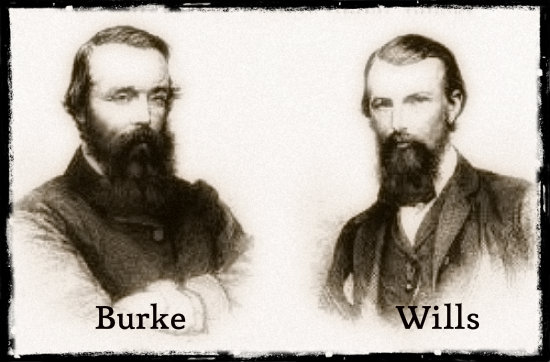 The Disastrous Burke and Wills Expedition of 1860.

Robert O’Hara Burke was born in Ireland in 1821. Because of the Victorian gold rush, there was a shortage of police and so he joined the Victorian police force.

William John Wills was born in England in 1834 and had come to Australia when he was eighteen. He was a surveyor, meteorologist and astronomer.

Wills would have made a much better leader than Burke, although he too, had no experience as an explorer.

Although the colony had grown, much of Australia was still undiscovered.

Also, a route for an overland telegraph line was needed and the Victorian government offered a prize for the first expedition to cross Australia from south to north.

Although Burke had no experience as an explorer or a bushman, he was chosen to lead the expedition together with a man called George Landells.

However, it was not long before Burke had an argument with Landells and replaced him with Wills. Their well-equipped expedition set off 1860.

Burke was afraid that he would be beaten by John Stuart to be the first to explore inland Australia, and so he set off on camel with his expedition. Meanwhile, unknown to Burke, John Stuart had turned back and so there was no need now for Burke to hurry or take risks.

Burke was very impatient and would not let the expedition slow down for any reason. In addition, he set off without his medical officer and 2 other important members of the expedition.

Unfortunately, there was no one in the group who was a good bushman. Burke was so impatient to reach the Gulf, that he left some of his party behind with supplies at Menindee and set off with a party of nine men.

Burke then decided to push on towards the Gulf, even though it meant travelling in the heat of a northern summer. He took with him, Wills, King and Grey. He left the rest of the party at the Cooper’s creek camp with orders that the party was to return to Menindee in three months if the explorers hadn’t returned by then.

After nearly two months the party reached the Gulf of Carpentaria, but were unable to see the waters of the Gulf because of the mangrove swamps.

Burke would not wait to rest, and after only one day set off on the return journey which was made worse by fierce storms which turned the ground to mud. There was also a lack of food.

In addition the party who were supposed to be waiting at Cooper’s Creek for Burke to return, had left that morning and the depot was deserted. Brahe had waited 4 months and only left then because his men were getting sick from scurvy.

Wills wanted to stay at Cooper’s Creek, feeling sure that help would arrive. Burke ignored his advice and decided to set off for a police station at Mt. Hopeless. As leader of the expedition, he ordered that they all go on.

Unfortunately, he did not leave a message at Cooper’s Creek, and when Brahe returned, he did not know that the party had been there. The camels were dying, there was no food and the water was all gone. 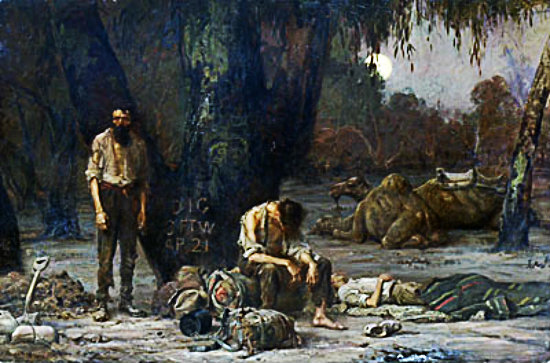 Both Burke and Wills were too weak by then to travel.

First Wills, and then Burke died.

For three months, friendly aboriginals cared for John King, who was the only survivor, until help arrived. He was rescued by a search party from Melbourne.

Although Burke and Wills died, they had proved that there was no inland sea and were the first to cross Australia from south to north, providing more valuable information on inland Australia.